Something that gets overlooked in sports performance is the first principle. Energy.
The amount of energy your body has left over after exercise is the most important factor.

In fact something that gets taken for granted is that athletes will consume enough by virtue of getting their macros right or even eating in the right percentage ratios. Some people even think that just eating to hunger will suffice for everyone, things are not so.

Percentages and ratios of macro-nutrients don’t matter when 100% is not enough. So a 50%, 30%, 20% split of not enough is never going to be enough – No matter your fetish, fancy, fallacy or foregone food conclusions.

Energy fuels processes, no matter where twas derived, everything in the human body requires energy and we have several simplistic energy expenditure compartments to look after.

1. Basal Metabolic Rate – these are the basic processes under the hood that keep us ticking over. A big body has more cells and requires more fuel to carry out processes. Enough energy to allow for this, keeps us weight stable at absolute bed rest.

2. Thermic Effect of Feeding. You can’t create fuel without eating it, chewing it swallowing it, releasing enzymes to break it down into it’s smaller parts, churning it in the stomach, moving it down the alimentary canal, letting specific cells and hormones detect specific nutrients for transportation and uptake to other cells around the body. This is itself is something of an energy costly process at ~10% of energy expenditure.
3. Physical Activity. All muscle contractions that lead to movement require energy.
4. Exercise. Even more muscle contractions that require even more energy. Then there is a recovery cost associated too.

If exercise takes priority over the calories (energy) being used in the system then there is less energy left over for the basal processes. Not a problem if there is enough energy coming in all the time to make up for it but how much is enough to take care of those processes? And what happens when there is not enough? 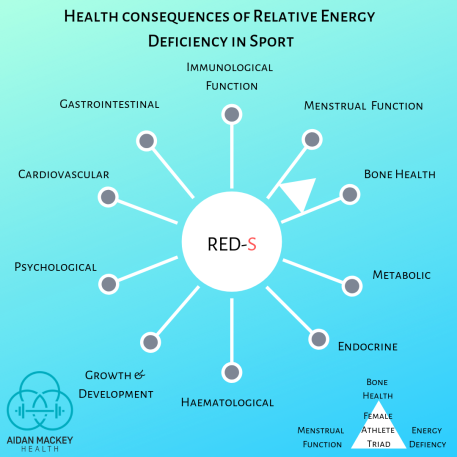 RED-S is the term given to the range of deleterious health and performance consequences of sub-optimal energy intake against exercise demands.

Energy Availability  is the amount of energy after exercise energy expenditure left over to fuel all of those normal bodily processes that humans require in order to thrive and reproduce. Everything from bone formation, heart beat, brain function, upkeep of an endocrine system responsible for complex processes like fertility, the ability to upkeep an immune system – these things don’t run on nothing.

There are numbers on this and there are consequences of completely neglecting the numbers.

Optimal EA is probably achieved at 45kcal per kg of FFM per day.

Take Energy In minus Energy Expended through exercise and divide that number by your Fat Free Mass.
Times of weight control and body composition manipulation can be lower than this at 30 – 40 kcal per kg FFM. These periods would optimally be undertaken outside of periods of high stress training.

It is difficult to find an exact number due to the limitations inherent even to the best guesswork that we can to do to find body fat percentage, energy intake and energy expenditure during exercise.

While there are some issues with finding exact thresholds, using the ranges provided by the literature are prudent. There will also be inherent individual differences, but it is important to assume the rule rather than the exception.

Something that might seem counter intuitive though is that diets high in fiber, probably above the recommendation of 30g -35g per day could play a small part in the effects of LEA. The main reason is that calories from fiber are largely undigested at about 2kcal/gram, so they are not going towards energy needs directly and also they have both a delayed effect on digestion and a higher satiating effect on appetite and feelings of fullness, making super high fiber diets that little bit more difficult to obtain ample energy from in the case of those at risk.

In a time of identity politics within the nutrition sphere, with calorie deniers on one side, and the ‘calories are all that matters’ on the other – there is also a meta battle of dissonance between these two camps and the intuitive eating, non tracking methods school. Here, the evidence stands to say, athletes simply need to eat enough calories or risk the consequences of sub-optimal performance, sub-optimal quality of life and ill health.
So, we have a positive means to encourage nourishment, and appropriate education and awareness around energy balance, rather than a traditional culture of tendencies for orthorexic type disordered behaviours in sport.

Female athletes performing high volumes of training are more at risk. It is not okay for a female athlete to lose their period, and it can be a complex thing to detect, what is feasible though is to look at these ranges for energy intake, make careful calculations and look at the bigger picture for all potential warning signs (see image).